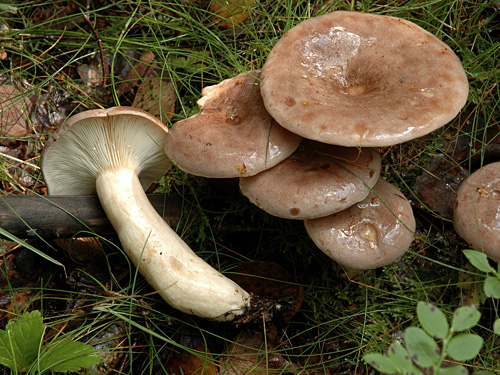 Distinguishing characteristics:
Northern Milkcaps are rather large, gilled mushrooms with a slimy surface. The cap colour is greyish brown. The stem is a lighter colour than the cap and is hollow. The gills are white and exude a characteristic white latex when damaged. The latex of milk-caps may change to a greyish-green colour when cooked. The Northern Milkcap (L. trivialis) has dark zones or blotches, sometimes with a violet hue, and is darker than the “pallid” Northern Milkcap (L. utilis), which is the colour of pale leather and does not have dark zones. The flavour is acrid.

Look-alikes:
The Grey Milkcap is smaller than the Northern Milkcap and can be identified by its latex, which turns a grey colour. The latex of L. uvidus stains violet when the mushroom is bruised. Both of these mushrooms can be eaten. The Fenugreek Milkcap (L. helvus) is thought to be mildly poisonous, so it is not to be harvested for consumption. It can be identified by its clear latex and liquorice-like odour; when dry, its surface has a brown colour resembling chamois leather. A careful mushroom hunter can distinguish the Milkcaps from their look-alikes based on size, sliminess, hollowness of the stem, and whether the latex remains white.

Habitat:
Milkcaps grow in mesic, boggy and herb-rich forests near spruce or birch. They are common in Finland, including Lapland, where they are found in mountain birch stands.

Harvest season:
The height of the season is August through September.

Use:
The Milkcap is Finland’s second most important commercial variety of forest mushroom after cep, and one of the edible mushrooms most frequently used in homes. Milkcaps have an acrid flavour when unprocessed, so they must be boiled before they are preserved or used in foods. After boiling in water for approximately 5 minutes, the compounds that cause the acrid flavour decay or dissolve and the mushrooms become usable. No food should be prepared with the water in which Milkcaps were boiled.

Milkcaps are traditionally preserved in salt. Before the preserved mushrooms are used, they should be soaked in cold water overnight in the refrigerator in order to remove the salt. Milkcaps can be used in mushroom salads, meat loaf, pastries, sauces and soups, or as a pizza topping. They can be added to foods immediately after boiling as well. Milkcaps can also be preserved in the freezer after boiling, which eliminates the need for salt.