Boletus edulis, B. pinophilus, B. reticulatus 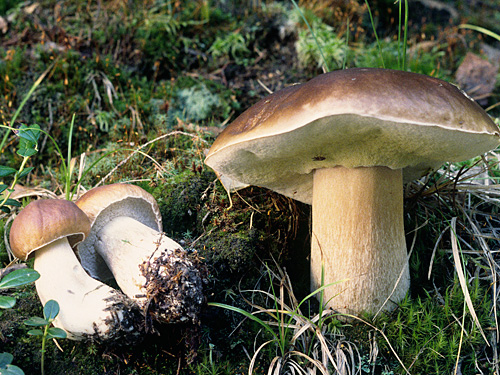 Distinguishing characteristics:
The Cep is a large, sturdy, rather hard mushroom. Its cap is of varying shades of brown and the cap cuticle is slightly viscid when moist. The spore tubes are tightly packed and light grey in young specimens, later changing to a yellowish green. The flesh of the mushroom is firm and retains a white colour. The stem of the Cep is off-white to light brown. The stem is often covered by a white mesh-like pattern, most clearly visible on the uppermost portion just below the cap. The stem may be relatively straight or somewhat round and barrel-shaped. It is always stout and rigid if the mushroom is fresh, however.

Habitat:
The Cep (Boletus edulis) grows in coniferous forests, especially in mesic heath forests near spruce trees. The Bine Bolete (B. pinophilus) is found near pine trees and therefore on more arid ground than the cep. The Summer Bolete (B. reticulatus) grows near oak roots in herb-rich forests. Ceps are found in most of Finland, especially the southern and central parts of the country. The eastern portion of central Finland is especially hospitable to Ceps.

Harvest season:
The season lasts from the middle of summer until the end of September.

Nutritional value:
The Cep contains plenty of fibre. It is especially rich in vitamins B2, B3 and D as well as folate, and also contains potassium, zinc and selenium.

Use:
Big amounts of Ceps are exported to Italy and other Central and Southern European countries. Finns are enthusiastic cep hunters. The cep is cooked as is, or sliced and dried to be used as an ingredient in a delicious mushroom soup or stew. 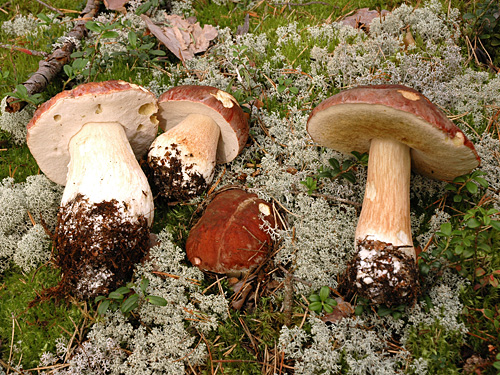