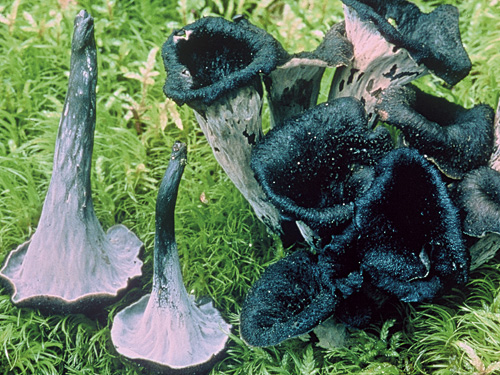 Distinguishing characteristics:
The Horn of Plenty can be identified by its funnel-shaped, grey-black fruiting body and thin flesh. It does not have gills, and there is no distinct boundary between the cap and the stem. The outer surface of the mushroom is bluish grey with a white scaly layer and black at the base. The flesh is grey-black.

Habitat:
The Horn of Plenty is found occasionally in southern and central Finland. It favours mesic herb-rich forests and heath forests. It often grows in dense clusters, and it is easily camouflaged among other vegetation due to its colouration. The Horn of Plenty is faithful to particular locations: it is worthwhile to look for it in the same areas where it has previously been found. It is less abundant than the most important commercial mushrooms in Finland. For that reason, it has not been harvested commercially with as much success as Boletes or Milkcaps.

Look-alikes:
The Ashen Chanterelle (Cantharellus cinereus) is a brown-grey mushroom, nearly brown when dry, with ridges on its undersurface.

Harvest season:
Harvesting time for the horn of plenty is August–October.