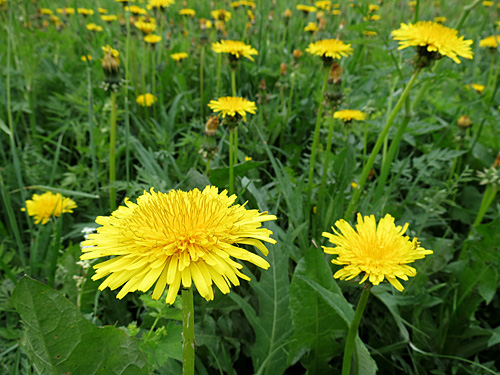 Distinguishing characteristics:
There are several hundred subspecies of dandelion. It is a perennial herb that reaches a height of 10–40 cm. Its pinnatifid leaves are arranged in a rosette at the base of the stem, just above the sturdy tap root. A hollow, light-coloured, leafless and somewhat soft stem emerging from the centre of the rosette ends in a single flower head. The green parts of the plant contain plenty of white latex.

Habitat:
Dandelions frequently appear near areas of human activity in places such as meadows, roadsides and empty lots. Many native microspecies also grow along shorelines or in wetlands, for example. The dandelion is common throughout Finland. Dandelions can be cultivated for salads in a nutrient-rich, soil-rich medium.

Nutritional value:
In terms of recommended daily allowances, dandelion leaves contain significant quantities of nutrients such as calcium, iron, and riboflavin as well as vitamins C, B6, A, and E.

Use:
The leaves have a strong peppery and pungent, often bitter, flavour. It is best to remove the acrid-tasting mid-vein of the leaf. The leaves can be used in salads, stews and soups. The roots can be added to soups, casseroles, and stews, or used as a flavouring for homebrews or other beverages, or as a coffee substitute. When ground, they can be added to flour for baking or making porridge.