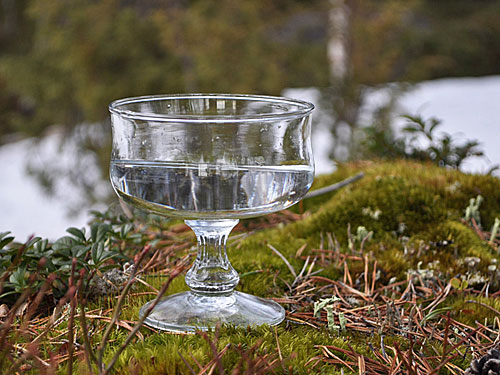 Sap is the nutrient fluid in deciduous trees such as birch, oak, and maple in northern latitudes. It consists mainly (99%) of water extracted from the ground by the tree roots. Sap contains nutrients that are stored by the tree until needed in the spring to start growth, before photosynthesis in the leaves begins. The flow of sap is initiated when the upper layers of ground begin to defrost and the trees start drawing water from the soil. Sap flows in the early spring, usually April–May. Sap is collected only with the landsowener's permission.

It contains natural sugars (glucose and fructose) as well as various kinds of fruit acids, primarily malic acid. It also includes trace amounts of nutrients, most notably calcium, potassium, magnesium and manganese, as well as some vitamin C. Sap contains no sodium at all. It is slightly acidic, with a pH ranging from 7.5 to 5.5.

The amount of sap that can be harvested from a tree depends largely on its condition and size. The most sap can be obtained from a healthy tree with a large crown and strong annual growth. One tree can supply 50–300 litres of sap. Fresh sap can be used to make sima, beer, or other homebrews. It can also be processed further, which normally involves pasteurization (at approximately +90 °C) and addition of malic or citric acid as a preservative. Many small businesses nowadays supply sap and sap products. Some of them are able to make sap products without using additives. This requires the sap to be harvested and processed under the strictest hygienic precautions and without introducing hygienic risks during handling. 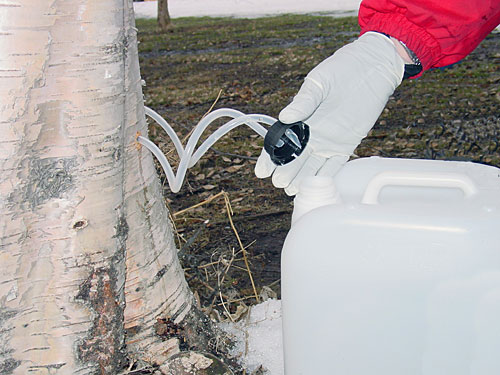 “Pettu” is the inner bark (cambium and phloem layer) of pine trees and has been used as a food source in the Nordic countries and northern Russia in times of need. A flour made from pettu has mainly been used to supplement the flour for rye bread. Pettu is more nutritious than grains in some respects, and is high in dietary fibre, iron, manganese, and zinc. It is also rich in flavonoids, which have been found to have health benefits in several studies. Indeed, modern-day studies have shown that this emergency nutriment is a healthy food ingredient. To prevent the effects of excessive pettu consumption that have been seen in times of famine, the quantity of pettu in foodstuffs should not exceed 25 percent by weight.

Pettu is harvested mainly from pine, but also from a few other suitable types of tree, such as elm and aspen. It is best to harvest pettu during the time of most rapid growth, when it is also richest in nutrients, from May to the beginning of July. A pine from which pettu is harvested should be at least fifty years old, preferably with a thin, smooth bark and few branches. Pettu is gathered by hand from an upright or felled tree and must only be harvested with the landowner’s permission.