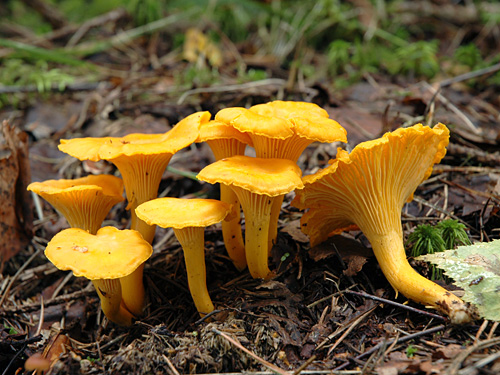 Distinguishing characteristics:
The Chanterelle is one of Finland’s most easily identified and highly valued mushrooms. The entire mushroom, including the flesh, is a pleasant yellow colour. The cap is funnel-shaped and can be very convoluted around the edge. The undersurface of the cap features gill-like decurrent ridges. The mushroom can also be recognized by a characteristic fruity scent that becomes stronger as it is prepared for consumption.

Look-alikes:
The False Chanterelle (Hygrophoropsis aurantiaca) resembles the true Chanterelle on top, but has tightly packed gills on the undersurface.

Habitat:
Chanterelles are common in the southern and central parts of Finland. They can be found as far north as Lapland. Chanterelles grow at the roots of birch trees. They occur in diverse landscapes and forest types, but not in overly thick or dark forests. Some favourable environments for Chanterelles include lakeshores and mixed or deciduous forests on islands. Since the mushroom tends to grow in the same place for several years, it is worthwhile to check on good Chanterelle spots annually.

Harvest season:
Chanterelle season is long, from late June to the end of September in Finland, so the same spot can be checked several times in the course of a summer.

Use:
Chanterelles are at their best immediately after they are gathered. They are suitable for a wide variety of preparation methods and do not require preliminary processing. They can be dried, frozen, or preserved in brine. They also keep well in a refrigerator, staying relatively fresh up to several days. 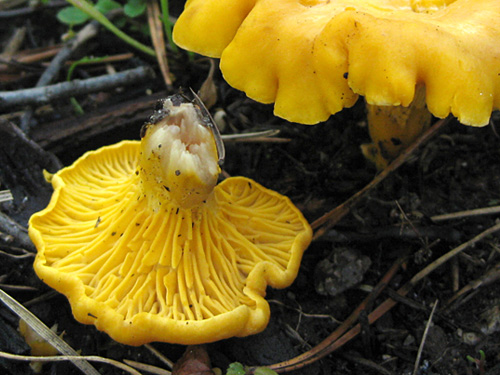