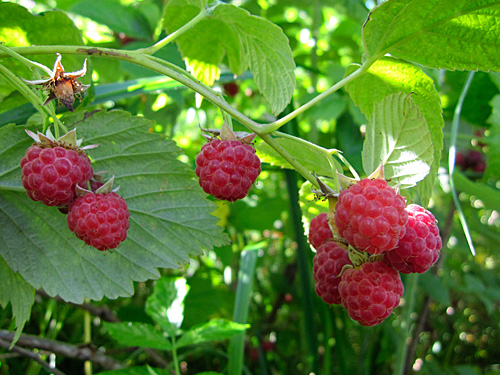 Distinguishing characteristics:
The raspberry is a suckering shrub reaching 50–150 cm in height. Its stems are biennial and prickly, erect or arching. In the summer of the first year, the stem is green and unbranched. By the next summer, it is woody and branched. This is when the flowers bloom and the berries ripen. The leaves are odd-pinnate, with two to three leaflet pairs normally appearing on each branch, three on flowering branches. The upper surface of the leaf is green and the underside densely hairy and either white or grey. The shrub loses its leaves in the winter. Its greenish-white flowers bloom in June–July. The berry is a sweet and fragrant red aggregate drupe which detaches from the receptacle of the flower when picked.

Habitat:
The raspberry is commonly found in southern and central Finland, reaching as far north as Oulu. The berry becomes scarcer in more northerly areas. The raspberry produces one of the greatest yields of all wild berries in southern parts of the country. It grows in herb-rich and mesic boreal  forests and along the margins of ditches and forests, the banks of streams and rivers, and the edges of logging areas and roads. The species spreads quickly in nutrient-rich forest regeneration areas following final felling and can keep growing in these areas for 20–30 years.

Harvest season:
Raspberry season runs from the beginning of August until the beginning of September. The berries ripen and the flowers bloom best in sunny conditions, such as those found in young forests and logging areas. Good crops are also produced along forest roads and areas cleared for power lines.

Nutritional value:
Raspberries contain vitamin C and folate. The amount of vitamin C in 100 grams of raspberries is equivalent to that of an average-sized tangerine. The berry is also a good source of fibre. As is typical for aggregate drupes, raspberries contain the class of polyphenols known as ellagitannins.

Use:
Raspberries are used in juices, berry soups, baked goods and desserts. The fragrant berry is lovely on its own or as part of a snack, supper or breakfast. Raspberries combine well with other berries, too. For example, raspberries can be mixed with bilberries to make queen’s jam, a Nordic specialty. The berries can be preserved frozen, dried, or as juice or jam. 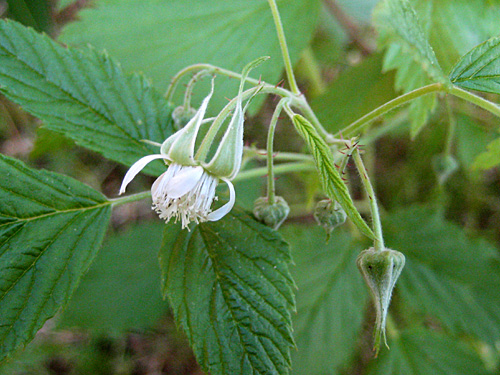