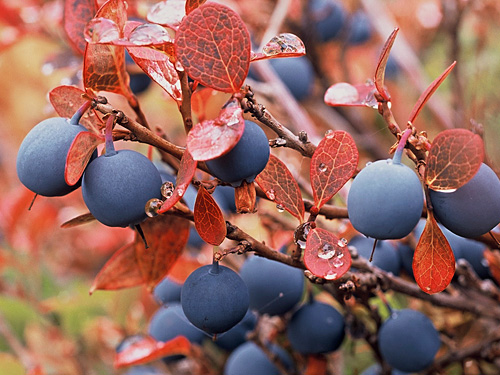 Distinguishing characteristics:
The bog bilberry is an erect perennial dwarf shrub reaching 15–50 cm in height. Its stem is branched at the base, brownish and woody. The leaves of the bog bilberry are obovate, entire at the margins, blunt and tapering, and drop in winter. The leaves are a greyish-bluish green above and light green underneath. The inflorescence is a 1–3-flowered terminal raceme. White to reddish flowers bloom on the shrub from May to June. The berry has a waxy surface and is 8–12 mm in diameter, globose or ovoid, and often somewhat angular. It has a greyish-blue colour on the outside and is light-coloured on the inside. It is juicy with a mild taste.

Habitat:
The bog bilberry prefers wet conditions. It is a common bog shrub, growing primarily in pine or spruce bogs and on hummocks of rich fens. Abundant crops of berries are produced by bog bilberry shrubs in swampy or riparian heath forests. In Lapland it thrives in drier conditions and can be found in heath forests and mountain heaths.

Harvest season:
The bog bilberry blooms late in the year, nearly as late as the lingonberry. It withstands cold well and can produce berries in years when the bilberry’s flowers, for example, would be damaged by the cold. Bog bilberry flowers growing in the shelter of riparian forests rarely suffer from the cold. Picking season for the bog bilberry falls approximately half a month later than that of the bilberry, i.e. bog bilberries can be picked in August. The best crops are found in Forest Lapland.

Nutritional value:
The bog bilberry is rich in natural blue anthocyanin pigments as well as in flavonols such as quercetin and myricetin. 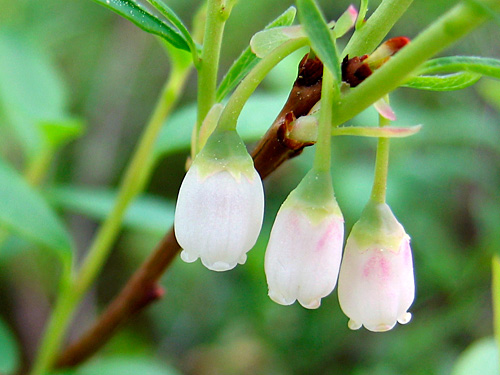