Distinguishing characteristics:
The Matsutake is a large mushroom with a strong aroma. The Matsutake is found throughout Finland in association with pine trees. It is also called “Pine Mushroom”. The cap varies from light to dark brown or the colour of tar, without reddish hues. It measures 6–20 centimetres across. Large, dark brown, silky scales adhere to the surface of the cap. The stem is 5–20 centimetres long and 1.5–2.5 centimetres thick. It is of uniform thickness, or slightly wider towards the bottom. The stem is often bent, extends deep into the ground, and is firmly attached at the base. The gills are white and notched. In young specimens, the gills are covered by a protective veil that later leaves a fuzzy ring around the upper part of the stem. The stem is white above the ring and has a brown pattern below it. The flesh is firm and white, and keeps well.

Look-alikes:
The key to Matsutake identification is its exceptionally strong, aromatic, sweet scent. A similar species, the booted knight (Tricholoma focale), has a mild, flour-like scent. Its stem narrows toward the ground and is not firmly attached at the base, unlike the stem of the Matsutake. The booted knight varies in colour from fox-red to dark reddish brown. It is also smaller than the Matsutake. It is not suitable for consumption.

Habitat:
The Matsutake is probably most common in northern Finland. It grows best in mature, sparse stands of pine with sandy soil and a thin layer of humus, where lichens are also often found.

Harvest season:
The season starts at the end of July and continues until the beginning of October.

Use:
Matsutake need not be parboiled before being prepared for consumption. They can be simmered, stewed, grilled, or used in sauces and soups. 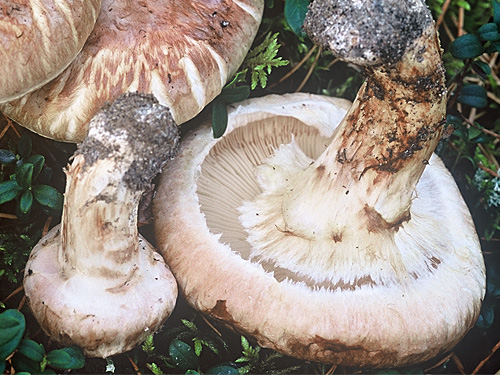