Higher intake of flavonoids may contribute to weight maintenance

Previous studies have revealed associations between intake of certain fruits and vegetables and weight maintenance. An increased intake of blueberries, apples, pears, prunes, strawberries, and grapes has contributed to weight control.  According to animal models and short term human studies, flavonoids decrease energy intake, increase glucose uptake in muscle, and decrease glucose uptake in adipose tissue. Flavonoids are found in a variety of fruits and vegetables. Furthermore, flavonoids may decrease fat absorption, increase energy expenditure, and inhibit adipogenesis (the process during which fibroblast develop into mature adipocytes).

The aim of this study was to investigate the associations between consumption of certain flavonoids and weight gain. The results would provide guidance on which fruits and vegetables should be chosen in order to prevent weight gain. Even small increases in weight can have a significant effect on the risk of hypertension, diabetes, cardiovascular disease and cancer. Therefore strategies to help people to maintain a healthy weight are critically needed. 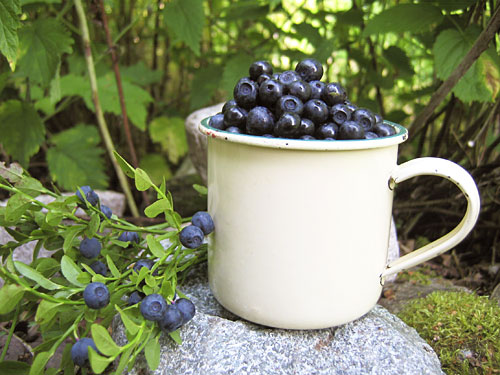 Three large prospective cohorts were used as a study population, consisting of 124 086 American men and women. In the beginning of the study, the average ages of men and women were 46.9 and 42.4 years, respectively. The total length of study period was 20 or 24 years, depending on the program.

Over each four year period, men gained an average of 2.2 lbs (1 kg), women 3.7 lbs (1.7 kg). Men had a median intake of 224 mg/d of total flavonoids, women 242 mg/d. Increased intake of most flavonoid subclasses was inversely associated with weight gain.  The strongest magnitude of association was seen for anthocyanins, flavonoid polymers and flavonols.

Figure 1. Major dietary sources of flavonoids for women. Blueberries and strawberries were the main food sources for anthocyanins. Figure has been redrawn from: Bertoia ym. (2016): Dietary flavonoid intake and weight maintenance: three prospective cohorts of 124 086 US men and women followed for up to 24 years. BMJ 2016, 352:i17.

The authors wish that these results will help to refine previous dietary recommendations for the prevention of obesity. The results suggested that choosing high flavonoid fruits and vegetables, such as apples, pears, berries, and peppers, may help with weight control. Most Americans consume less than one cup of fruits and less than two cups of vegetables daily, while two cups of fruit and 2.5 cups of vegetables are recommended. People could maximise their health benefit by including optimal fruits and vegetables in their daily diets.