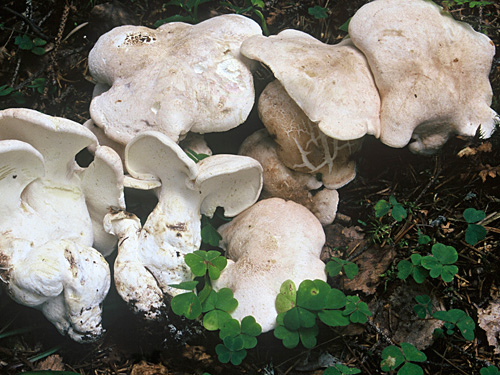 Distinguishing characteristics:
The Sheep Polypore has an irregular shape and yellowish colour and may grow up to a diameter of about twenty centimetres. The underside of the cap is covered by a thin, dense pore layer that is not easily separated from the flesh. The stem is short, stout and bumpy. The flesh is firm and white. The flavour is mild.

Habitat:
The Sheep Polypore grows in groups or clusters in coniferous forests, usually in mature spruce stands, often among moss. It is common in southern Finland and occasional further to the north.

Harvest season:
The Sheep Polypore grows from August until mid-October.

Use:
Sheep Polypore is especially good when fried as is, and is an excellent candidate for drying. It can also be pickled, or frozen in its own broth after being brought to a boil.