Poisonous mushroom varieties also grow in the wild in Finland. About 50 species are known toxic and at least five of them are deadly/ dangerously poisonous. Therefore, it's important to collect mushrooms for consumption only if you definitely recognize them as edible species. Some of the most common, most toxic mushrooms include the destroying angel, fly agaric, deadly webcap, brown roll-rim and funeral bell.

Always pick mushrooms with their “roots”, since the shape of the base is an important distinguishing characteristic. A bulbous, onion-like base hidden below the ground is a typical feature of Amanita spp. mushrooms. This medium-sized mushroom is white all over. It is egg-shaped as it emerges from the ground and may closely resemble edible Agaricus spp. white mushrooms. The cap then broadens, and old specimens may become slightly yellow at the centre. The gills are pure white. The stem is long and has a wide, hanging ring near the top. The mushroom has the typical Amanita spp. feature: the underground portion of the stem is thick and bulbous. The Destroying Angel grows individually or in groups in spruce-dominated heath forests. It is very common in southern and central Finland. It damages the liver and kidneys and is lethally poisonous, so it's advisable to avoid white mushrooms altogether when collecting mushrooms to eat. 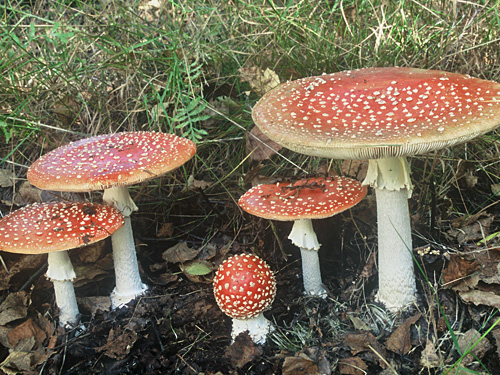 The cap of the Fly Agaric is red and initially has a globular shape that later flattens out. There are white spots on the cap surface, possibly absent from some specimens. The gills are yellowish white and the flesh is white. The white stem has a hanging ring with a jagged edge, and an onion-like bulb at the base. The fly agaric is common throughout Finland. Despite its attractive appearance, it is poisonous. It contains toxic compounds that affect the nervous system in particular. 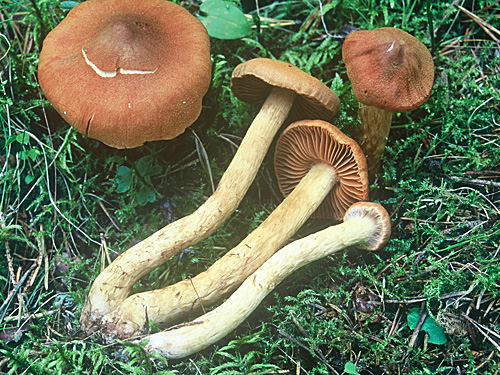 The Deadly Webcap is a medium-sized mushroom, brown throughout with a matte surface. The cap is conical at first and broadens with age. The cap is cinnamon brown with a distinct hump in the middle. The gills are brown and wide-
ly spaced. There are fragmented zones of yellow on the brown surface of the long, slender stem. The Deadly Webcap is found in mossy coniferous forests, particularly in southern and central Finland. It is lethally poisonous, so avoid collect-ing mushrooms with brown gills for consumption. The Brown Roll-rim is a flat mushroom that becomes funnel-shaped with age. The cap is felted and leather-brown with a slight hump in the middle. The edges of the cap are prominently curled in. The gills are decurrent, light-coloured when young and rusty yellow when older, and darken where touched. They easily separate from the cap. The stem, of the same shade of brown as the cap, often narrows toward the base. The Brown Roll-rim is common in many types of habitat throughout Finland. The Funeral Bell grows individually or in small clumps on coniferous tree stumps or piles of wood or bark, rarely on the wood of deciduous trees. It is common throughout most of Finland. Its cap is a few centimetres wide with thin flesh and has a cinnamon brown colour. The stem is slender and has a thin ring near the top. There are white fibres on the stem below the ring. The gills are light brown. The Funeral Bell resembles the sheathed woodtuft, which grows in large clumps on birch tree stumps. Avoid collecting mushrooms growing on tree stumps if you are not sure of the species you are picking.

Also Death cap (Amanita phalloides) is poisonous and False Morel (Gyromitra esculenta) if it´s not cooked 5 minutes twice (1 part mushrooms and 3 parts water) and the cooking water thrown off. Mushroom toxicity is always a species-specific. Therefore you have to know for sure those Finnish mushroom species, which are used for food. The mushrooms, which are growing in Finland, are often different species than those growing in other countries!