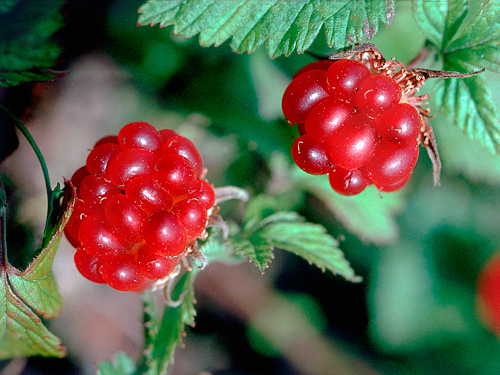 Distinguishing characteristics:
The arctic raspberry is a perennial herb with a 10–25 cm tall, erect stem. Its trifoliolate leaves are green with toothed margins. The arctic raspberry is both insect- and self-pollinated. Its flowers are red or purplish red and usually solitary. The flowers bloom in June–July. The berry is dark red, greenish, brownish or nearly black and is a fragrant and flavourful aggregate of drupes. The berry is firmly attached to the base and does not separate from it when picked.

Habitat:
The arctic raspberry grows in all parts of Finland, but is most common in the central zone extending from Kuopio to Kemi. It grows in herb-rich heath forests, fertile spruce bogs, damp meadows, on riverbanks, along the sides of ditches, streams and roads, as well as in logging areas, at the edges of cleared fields and in old pastures. The arctic raspberry once benefited from slash-and-burn agriculture and the conversion of forests into grazing land. Effective modern soil and forest cultivation techniques, on the other hand, are harmful to the growth of the arctic raspberry and have also resulted in a reduction of its natural habitat.

Harvest season:
The arctic raspberry crop varies a great deal from year to year. The most abundant crop can be found within the narrow belt of land stretching from South-East Finland to the Oulu region. Plants produced asexually by the same parent plant may not produce berries, as some arctic raspberries are not able to self-pollinate. Successful flowering and pollination of the arctic raspberry require suitable temperatures and moisture levels. The arctic raspberry harvest peaks from mid-July until the beginning of September.

Nutritional value:
Compared to the other aggregate drupes discussed here, i.e. the cloudberry and raspberry, the arctic raspberry contains the most ellagitannins.