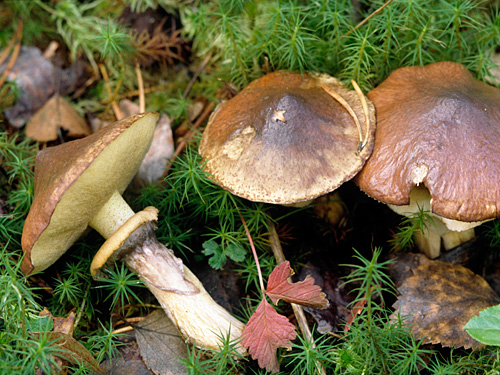 Distinguishing characteristics:
Slippery Jacks have a dark brown cap, shiny in dry weather and slimy in wet weather. They have a large ring around the stem that initially covers the spore tubes and later, as it dries, adheres to the stem. The stem is yellowish above the ring and off-white below it. The pore surface is tightly packed and yellow in colour. The flesh is light yellow and soft, and does not change colour when cut.

Look-alikes:
The Larch Bolete (Suillus grevillei) and the Darker Suillus clintonianus mushroom are both associated with larches. The cap of the Larch Bolete is a brownish yellow, whereas S. clintonianus is a strong reddish brown. The Weeping Bolete (Suillus granulatus) is found mostly in southern Finland, is associated with spruce trees, and has no ring around the stem.

Habitat:
Slippery Jacks grow at the roots of spruce trees and are quite common in heath forests. They can often be found at the grassy edge of a forest path, yard, or park.

Use:
Slippery Jacks should be picked when young because they quickly become soft and maggot-ridden. It is best to immediately cut off the slimy, tough, leather-like cuticle with a knife so that the mushrooms in the basket don’t get too messy. Slippery Jacks are delicious mushrooms and can be prepared as they are in a frying pan. They can be frozen, dried, or marinated.