Look-alikes:
Gathering of the sondenii subspecies (U. dioica ssp. sondenii), found along rivers in Lapland and free of the stinging hairs, is not permitted.

Habitat:
The nettle is a pioneer plant that spreads easily in ruins or along ditches, for example. Nowadays it is also cultivated. It is a perennial herb found frequently in populated areas throughout the country, except for the northernmost part of Lapland.

Harvest season:
Shoots and young leaves of nettle are gathered in the spring, before flowering. Later in the summer, nettle can be cut down to stimulate the growth of new shoots. The young shoots are harvested when they are 10–15 cm long. Nettles should be handled with protective gloves because of the stinging hairs on its leaves and stem. The gathering of nettle near areas for composting or livestock raising, or where nitrogen fertilizer has been applied, is not recommended because the nettle may easily accumulate excessive amounts of nitrates, which are harmful to humans.

Nutritional value:
The nettle is a power pack of nutrients. In comparison with spinach, it contains large quantities of protein, dietary fibre, etc. In terms of recommended daily allowances, nettle contains significant amounts of calcium, magnesium, potassium, phosphorus, iron, and other nutrients. It is especially rich in calcium, and is thus a suitable source of calcium in vegetarian diets as well. It also contains considerable amounts of vitamin C, folate, and vitamins A and E. From a nutritional standpoint, the low sodium content of nettle is also an advantage.

Use:
Nettle is used similarly to spinach in foods, and also in herbal beverages. It can be used in vegetable dishes or sides, sauces, stews, soups, pies, crepes, pancakes, breads and rolls. Dried nettle works well as a main ingredient in green powder and herbal beverages. Nettle seeds can be gathered in autumn and added to just about any food. For example, they can be sprinkled on top of a breakfast porridge or cereal.

Nettle shoots can be blanched and frozen, or dried as they are for later use. Blanching and drying cause the hairs to lose their sting. Blanching decreases the concentration of nitrates in nettle, but also eliminates some of the nutrients. Blanching involves dipping the nettle shoots in boiling or near-boiling water, which causes the plant to turn a dark green colour throughout. The shoots are then rinsed with cold water and squeezed dry. The blanched nettles are rolled up together and cut into small pieces. The pieces of nettle are loose and can easily be frozen when packed in a sufficiently thin layer. 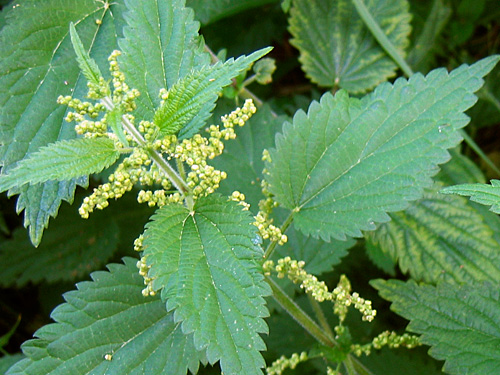