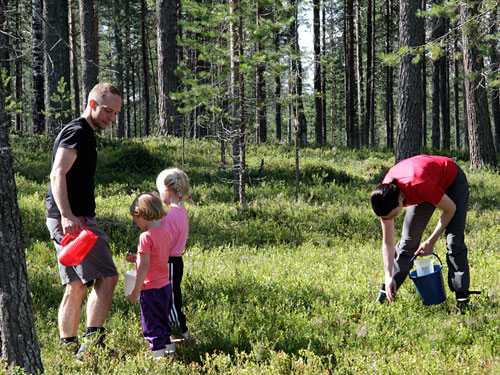 An Everyman’s Rights tradition provides people in Finland unparalleled opportunities to explore nature and enjoy the bounty of the forest. Nearly 90 per cent of Finland’s surface area falls under the Everyman’s Rights law and can be used for recreational enjoyment of the great outdoors. Everyman’s Rights also apply to visitors from abroad. Moving about in natural areas does not require the landowner’s permission, nor are the privileges enshrined in Everyman’s Rights subject to the payment of any fees. Anyone may freely pick wild berries, mushrooms and plants, with the exception of a few species protected under environmental laws.

Everyman’s Rights also apply to the commercial gathering of berries and mushrooms, which also does not require permission from the landowner. In this way, these rights also benefit businesses, for example those dealing in natural products, as well as food processors and nature tour operators. In the case of commercial tour operators, however, it is a good idea to ask for the landowner’s permission in advance.

Many herbs do not fall under the purview of the Everyman’s Rights tradition. These include tree leaves, shoots, shrubs, lichens, mosses, barks, willows, coniferous cones and special natural products such as sap and the inner layers of pine bark. In the case of these natural products, the landowner’s permission must always be obtained before collection. This restriction also applies to the gathering of natural products on publicly owned land.

The privilege of Everyman’s Rights also comes with a responsibility towards the environment. It is prohibited to violate nature by littering or vandalism, which are criminal offences. Nature is sensitive and renews itself slowly, so those passing through it should take care to avoid disturbing its delicate balance.

There are limits to what is allowed

Certain rules must be adhered to when out in nature. It is prohibited to litter or otherwise cause damage to natural areas or to disturb the domestic peace of others by failing to keep an appropriate distance, for example, or otherwise offending other people’s right to privacy. It is not stipulated in the law exactly how many metres away from private gardens one is allowed to pick wild berries. Good manners would dictate not picking berries in the immediate proximity of someone’s home or garden, keeping oneself instead at a suitable distance (just out of view and earshot is the recommended distance). Driving a motor vehicle off marked tracks or roads without the landowner’s permission is also not permitted under Everyman’s Rights.

There are often several different groups out in nature at the same time, which means that certain “traffic rules” are best observed. For example, if a hunting party is in the middle of a deer hunt, berry pickers are obliged to stay clear of the area in question. If, on the other hand, the berry pickers have arrived at the area in question before the hunting party, the hunters should keep away.

Everyman’s Rights are restricted in some ways in certain places such as national parks, recreation areas and protected areas. Regulations governing use of these areas is subject to specific nature conservation and environmental laws. It is useful when spending time out in the Finnish countryside to be familiar with Everyman’s Rights and aware of the rules and regulations concerning accepted behaviour when out in nature.