Berry polyphenols have beneficial effects on learning and memory

Aging is often associated with cognitive impairment. For example knowledge, attention, memory, learning, judgment, evaluation, problem solving, decision making, and production of language are cognitive processes. Age-associated neurodegenerative disorders such as Alzheimer's disease and Parkinson's disease may contribute to the loss of the ability to live independently. Therefore it is important to study the effects of aging on learning and memory and to develop new strategies to prevent the age-associated memory decline.

Fruits and vegetables rich in polyphenols have been highly studied for their potential beneficial effects on health. E.g. flavonoids have been shown to improve learning and memory in both animals and humans. Also anthocyanins, present e.g. in bilberries, have been shown to prevent memory deficits in aged animals. Also many other members within the polyphenol family seem to have positive impacts on memory and learning. In this study, the effects of age and polyphenol-rich diet on hippocampus-dependent learning and memory processes were investigated. Hippocampus is a major component of the brains of humans and other vertebrates. It plays important role in the consolidation of information from short-term memory to long-term memory and spatial navigation. 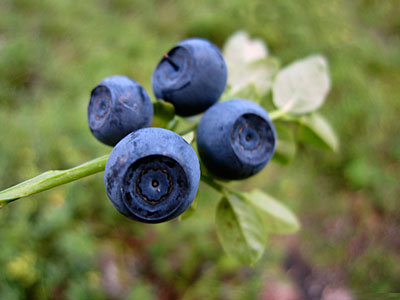 Morris water maze is a behavioural procedure mostly used with rodents. It is widely used in behavioural neuroscience to study spatial learning and memory. The animal is placed in a large circular pool and is supposed to find an invisible or visible platform that allows it to escape the water by using various cues. At the beginning, mice were familiarized to water and swimming during to familiarization days (Figure 1). On day 1, mice were given six trials (90 s) to find a visible platform pointed out with a cue. During the training sessions (days 1-4), animals were required to locate the invisible platform. They were trained for six trials a day (90 s).

Seventy two hours after the last training session, the platform was removed from the pool and spatial memory was evaluated for 60 s. The speed, the latency and the distance to reach the platform were recorded by a videotracking system. Also body weight and food intake were monitored weekly during the 8-week study period. After the probe test, mice were euthanized, and brains were removed  for tissue preparation.

Figure 1. Morris water maze procedure. A 2-day familiarization period was performed before the 1-day cued learning. Spatial learning has then been evaluated over 4 days. Seventy two hours after the last learning trial a probe test was performed in order to evaluate spatial memory. Figure has been redrawn from Bensalem et al. (2016): Dietary polyphenol supplementation prevents alteration of spatial navigation in middle-aged mice. Frontiers in Behavioral Neuroscience 10: 9.

According to results, polyphenol-rich diet was successful in reversing the age-induced effects. The middle-aged mice fed the control diet did display spatial learning deficits, which was evidence of age-related cognitive decline. Feeding this age group berry extract, however, was found to counter these age-induced effects. The brain biology of the berry-fed animals was different from their controls, with this group not displaying any reduction in the expression of hippocampal calmodulin kinase II (CaMKII) mRNA levels. CaMKII is associated with neuronal health, synaptic plasticity and long-term memory. It seems that polyphenols tend to reduce the cognitive decline by improving the synaptic plasticity pathway. Synaptic plasticity is the ability of synapses to strengthen or weaken over time, in response to increases or decreases in their activity. The study concludes that polyphenol-rich diet could be an efficient nutritional way to prevent age-induced cognitive decline.