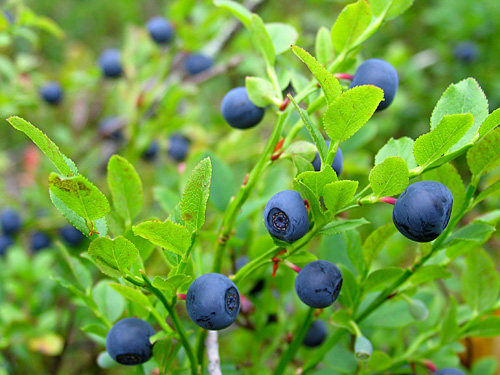 Distinguishing characteristics:
The bilberry is a perennial, erect, 10–30 cm tall shrub with angular, green branches. Its leaves are elliptic, tapering, have toothed margins, and drop for the winter. The bilberry flowers in May–July. Single, pink, bell-shaped flowers grow in the axils of the leaves. The bilberry is dark blue both outside and inside, globose, and has a waxy surface. The berries can also be black and shiny in cases where the protective waxy layer is missing. These have been called tar bilberries (tervamustikoita) in the vernacular.

Finnish bilberry growing wild in Finnish forests, has been gathered and used for centuries. The cultivation of the highbush blueberry (Vaccinium angustifoloium , V. corymbosum) is popular in North America and countries situated more south than Finland. Highbush blueberry has been often called Wild Blueberry.  Often consumers and industry think that the cultivated and forest berries are the same species but they differ rather much.

The anthocyanin levels of Finnish bilberry are high when compared to other berries . It contains anthocyanins at a level that is 3-5 higher than that in highbush blueberry. Anthocyanins are bioactive compounds, which give the Finnish bilberry its characteristic dark blue or purple colour inside and out. The difference in the colour of flesh between the bilberry and blueberry is visible, since the flesh of highbush blueberry is white.

Habitat:
The bilberry is common in all parts of Finland. It is a typical coniferous forest plant whose sprigs can keep growing for up to 30 years. It thrives in herb-rich, mesic and sub-xeric heath forests of southern Finland. In northern Finland, the bilberry is found in slightly drier and more barren heath forests. It prefers shady areas out of direct sunlight. The best places to look for bilberries are northern slopes, edges of logging areas and the banks of forest ponds.

Harvest season:
The best time to pick bilberries is from the end of July until the beginning of September. The crop is at its most abundant for about two weeks after the berries have turned dark blue. Night-time frost during the early flowering stages of the plant weakens the crop. The amount of pollination that the flowers receive greatly affects the size of the crop. As insects do not fly in the cool temperatures of early summer, pollination does not occur during this time. In order for hibernating bilberry shrubs to avoid cold damage and produce berries in season, they require a protective a blanket of snow during winter.

Nutritional value:
Bilberries contain vitamins C and E. They are also a good source of fibre. The most significant health benefit of the bilberry, however, is the anthocyanin compounds it contains. The wild bilberry is three to four times richer in these flavonoids than is the related highbush blueberry, a cultivated plant. The blue pulp of the wild bilberry is full of the pigment anthocyanin, while the highbush blueberry has a light-coloured pulp.

Use:
Bilberries can be used as a raw ingredient in berry soups, baking, milkshakes, porridge and juices. Bilberries can be preserved by freezing, drying or crushing or by cooking them to make juice or jam. Bilberries are used in the food industry to produce juice, jam, juice concentrate, dried berries, and berry powders as well as grain and dairy products. 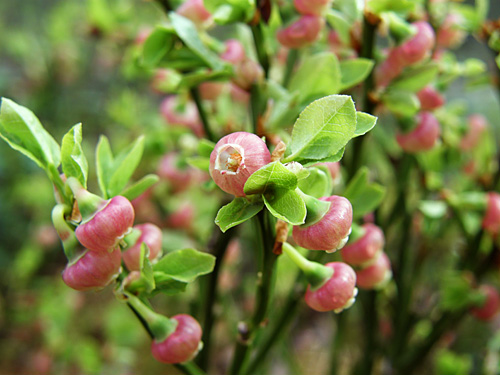 The best time to pick bilberries is from the end of July until the beginning of September.