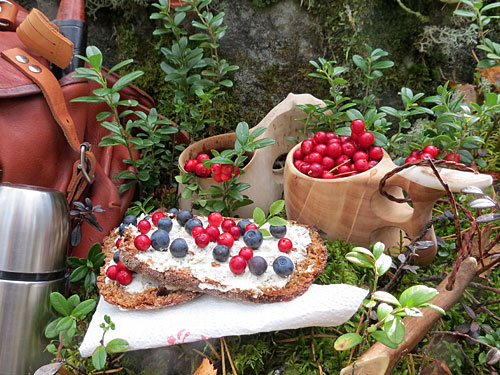 The bright Northern summer ripens a luscious harvest of berries in the forests and bogs every year, which anyone who spends time in nature can benefit from. Even a relatively poor crop will yield approximately 100 kg, or 20 buckets, of wild berries per person in Finland. Approximately 50 varieties of wild berries grow in Finland, of which 37 are edible. Of these, around 20 varieties are suitable for picking and consumption. The best known and commercially most valuable berries are lingonberries, crowberries, bilberries, cloudberries, raspberries, cranberries and sea buckthorn.

The annual crop of forest berries is estimated at over 500 million kg, while the amount picked only adds up to about 3–10% of the entire crop in the case of lingonberries and bilberries, for example. An average of eight kilograms of wild berries per person is consumed per year in Finland. The proportion of berries in our diet should be increased, as berries are a rich source of vitamins, minerals, trace elements and polyphenols.

Many of the edible varieties of berries found in Finland can also be found elsewhere in Eurasia and in North America. Growing over such a large area, though, some of the varieties have evolved into their own species and sub-species. Many species found in Finnish nature, such as the wild strawberry, cloudberry, bog bilberry, cranberry, juniper, lingonberry, alpine bearberry, raspberry and crowberry also grow in North America. Rowan, stone bramble, bilberry and sea buckthorn grow in Europe and northern Asia.