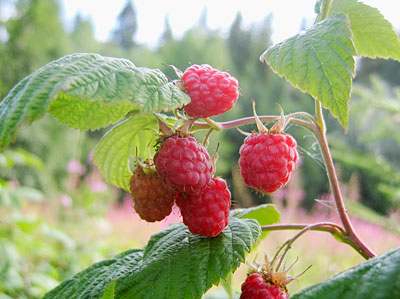 Eight groups of mice were provided either low-fat diet or high-fat diet combined with different raspberry products (raspberry juice concentrate, raspberry puree concentrate, raspberry freeze-dried powder, ellagic acid, raspberry ketone) for 10 weeks. Intake of raspberry products significantly reduced weight gain during the study. Furthermore, glucose tolerance was improved with raspberry supplement. Intake of raspberry foods exerted positive effects on gene expression in the liver. E.g. raspberry ketone diet regulated 30 genes even so that the pattern of expression more closely resembled that of the mice fed on low-fat diet rather than the high-fat fed mice. Surely many biological mechanisms are responsible, but clearly hepatic gene expression is being altered in a favourable manner with the consumption of raspberries.

Obese diabetic mice were divided into two groups for eight weeks. Control group was fed with basic food, but other group received also supplemented freeze-dried raspberries. According to results, plasminogen activator inhibitor-1 (PAI-1) was lower in the raspberry compared to the control group. High PAI-1 has been linked to higher risk for thrombosis and arteriosclerosis. Results demonstrate that raspberry consumption helps to decrease diabetes-related complications and hearth disease. 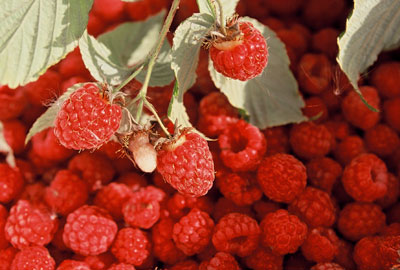 In addition to anthocyanins, ellagic acid is another polyphenolic constituent naturally occurring in many fruits and berries. The highest ellagic acid content is found in berries of Rubus and Fragaria species (raspberry, cloudberry, arctic raspberry, and strawberry). The aim of this study was to investigate the binding ability of ellagic acid to the human PPARa-receptor, which regulates the lipid metabolism of liver. The results demonstrated direct ligand binding of ellagic acids to the PPARa-receptor and suggest that ellagic acids may have the potential to enhance fatty acid oxidation by transactivation of the PPARa pathway. The future studies will show whether this finding can be utilized in prevention of non-alcoholic fatty liver disease (NAFLD).

An osteoclast is a type of bone cell that breaks down bone tissue. Osteoblasts are cells that synthesize bone.Osteoclasts are stimulated by a cytokine known as RANKL. According to earlier studies, polyphenols have demonstrated anti-inflammatory effects in various tissues. The aim of this study was to examine whether raspberry polyphenols could inhibit the proliferation and activity of RANKL-induced osteoclasts by using mouse macrophage cells. Results suggested that the polyphenols associated with red raspberry would inhibit the negative effects of osteoclasts on bone health.